Although asynchronous technologies such as Ajax make Rich Internet Applications (RIAs) responsive, they can result in unexpected behavior due to nondeterministic client-side processing and asynchronous communication. One difﬁculty in understanding such erroneous behavior lies in the unpredictable contexts of the running system. Dynamic behavior analysis techniques do not help to verify the correctness of certain “blind spots” in the execution path. In this work, we present a static approach for extracting all possible state transitions described in source code from the RIAs. Our approach is based on the assumption that user, server and self interactions with the RIAs can change the states of the application. Our method consists of four steps: 1) using given speciﬁcations of Ajax relevant to interactions as rules, 2) creating a call graph, annotating interactions on it and extracting interaction controls, 3) abstracting the call graph to extract relationships among the interactions, and 4) reﬁning the relationships with the interaction controls. By extracting the state machines of test scenarios of the correct and wrong behavior, it can help developers to pinpoint the statements in the source code that lead to the erroneous behavior. Our approach has been evaluated against a few experimental cases and we conclude that it can extract comprehensible state machines in a reasonable time.

When developers test modern web applications that use JavaScript, challenging issues lie in their event-driven, asynchronous, and dynamic features. Many researchers have assessed the adequacy of test cases with code coverage criteria; however, in this paper, we show that the code coverage-based approach possibly misses some faults in the applications. We propose a mutation analysis approach for estimating the fault-ﬁnding capability of test cases. We assume that developers can ﬁnd overlooked fault instances and improve the test cases with the estimated capability. To create a set of faulty programs, i.e., mutants, we classify the JavaScript features in web applications and then deﬁne a comprehensive set of mutation operators. We conducted a case study on a real-world application and found that our approach supported the improvement of test cases to expose hand-seeded faults by an extra ten percent.

Web applications are complex; they consist of many subsystems and run on various browsers and platforms. This makes it diﬃcult to conduct adequate integration testing to detect faults in the connections between subsystems or in the specic environments. Therefore, establishing an eﬃcient integration testing method with the proper test adequacy criteria and tools is an important issue. In this paper, we propose a new test coverage called template variable coverage. We also propose a novel technique for generating skeleton test code that includes accessor methods and improves the template variable coverage criterion, using a tool that we developed called POGen. Our experiments show that template variable coverage correlates highly with the capability to detect faults, and that POGen can reduce testing costs. 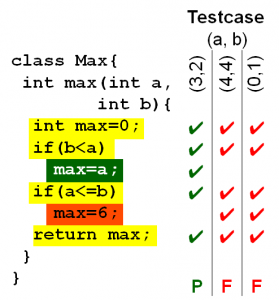